Dawn French (b. 1957) is a comic actress best known for her sketch show, French and Saunders, with her comedy partner Jennifer Saunders. She also starred in The Vicar of Dibley, and appeared as the Fat Lady in Harry Potter and the Prisoner of Azkaban.

French and Saunders appeared in The StoryTeller episode "Sapsorrow" as the bad sisters. French also played the Baker's wife in the 1996 film The Adventures of Pinocchio, which included effects by Jim Henson's Creature Shop.

In 2006, Dawn French interviewed Miss Piggy for her series Dawn French's Girls Who Do Comedy. 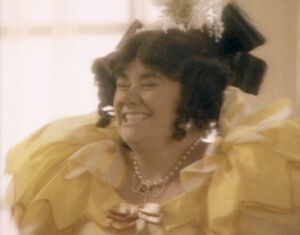 Dawn French in The StoryTeller.
Add a photo to this gallery

Wikipedia has an article related to:
Dawn French
Retrieved from "https://muppet.fandom.com/wiki/Dawn_French?oldid=1070371"
Community content is available under CC-BY-SA unless otherwise noted.