Dax Shepard (b. 1975) is an actor, usually in comedic roles, whose credits include Without a Paddle (with Matthew Lillard and Seth Green) and Old Dogs.

He appears in Sesame Street's 43rd season, demonstrating the word "amplify" with Abby Cadabby in a Word of the Day segment. He later appeared in a 2017 video for Chrysler alongside Big Bird and the Two-Headed Monster.

Shepard played Crosby Braverman on the TV series Parenthood. He starred in the 2005 film Zathura: A Space Adventure (as the astronaut, opposite the voice of Frank Oz as the robot), and other film credits include When in Rome (with Kristen Bell) and Baby Mama. 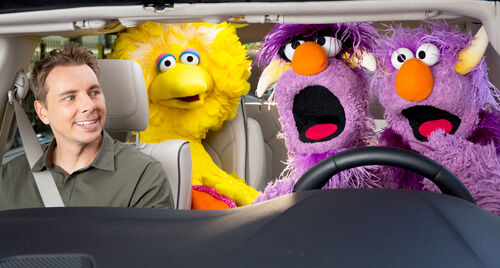 Wikipedia has an article related to:
Dax Shepard
Retrieved from "https://muppet.fandom.com/wiki/Dax_Shepard?oldid=1127875"
Community content is available under CC-BY-SA unless otherwise noted.