Debra Spinney (née, Deborah Jean Gilroy,[1][2] often referred to as Debi) is a former staffer of the Children's Television Workshop, and the wife and manager of Muppet Performer Caroll Spinney. She is credited as "For Big Bird," along with Kermit Love, in Big Bird in China.

She appeared in on-screen, together with Jon Stone and Kermit Love, in episode 750 of Sesamstrasse in 1981, as revealed in a comic strip by Caroll. She has also made cameos in other Sesame Street episodes and productions.

Debra has also occasionally done some background and assistant performing in various productions. She played Big Bird's legs in a scene in Episode 1319 where Caroll was playing Oscar.[3] In a reversal, Debra puppeteered Oscar during the Sesame Street cast's performance at the 1982 Daytime Emmy Awards, while Caroll was in the Big Bird puppet.[4] Below the frame, she puppeteered Simon Soundman during the "Carol Sing" in A Muppet Family Christmas.[5] 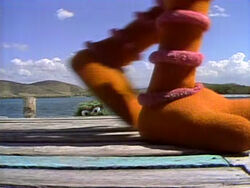 Retrieved from "https://muppet.fandom.com/wiki/Debra_Spinney?oldid=1234969"
Community content is available under CC-BY-SA unless otherwise noted.