Deena is a young, energetic pink monster with red hair and googly eyes, like Cookie Monster's. She talks in monster grammar: "Deena wants to play!" She lives in a cave with Pearl, who functions as her caretaker.

Deena was first seen during Season 11 of Sesame Street in Episode 1403. She, along with Pearl, virtually vanished after season 12. However, they did made background appearances in the wedding finale of The Muppets Take Manhattan.

The character was created by Norman Stiles, who named her after a friend of his.[1] In a 2015 interview, he spoke of the character:

“The character was a monster whose main obsession was play; turning everything, every situation, into an opportunity to play. At the time, the significance of play as a critical element of brain development wasn’t being promoted as avidly as it is today. We know now that free play, encouraging children to play, is, if anything, one of the most critical things that children do and that parents can do with their children that will help their brains develop.

Play for Deena was like cookies for Cookie Monster and counting for The Count. For whatever reason, as we tried the character in a few sketches, Deena’s insistence on playing was more annoying than amusing.[1]” 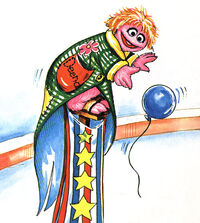 Deena was pictured in a 1981 set of stickers made by Drawing Board, posing with the letter D. 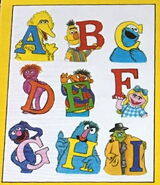