Delbert the La Choy Dragon appeared in television commercials for La Choy chow mein from 1965 to 1967. In some commercials he was teamed with Mert, a meek, bespectacled Muppet spokesman.

Though originally built as a live-hand character, in 1966 he was rebuilt as a full-bodied character to engage with live actors in domestic settings.[1] The puppet was capable of emitting fire from its mouth, creating a unique effect in the commercial he appeared in.

Although he's not named on screen, Delbert's name is documented elsewhere.[3][4]

A rebuilt version of Delbert has been seen in recent exhibits such as Jim Henson: Puppeteer. The 2010 comic book The Muppet Show Comic Book: Family Reunion makes a reference to the La Choy Dragon in the last panel, showing a giant Delbert in a chef's hat attacking a building as Skeeter prepares to stop him. 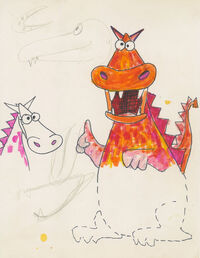 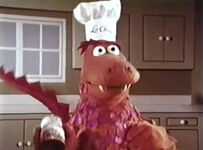 The hand puppet version of the La Choy Dragon. 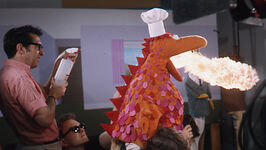 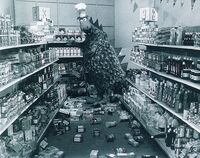 The La Choy Dragon in a supermarket. 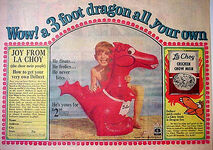 Retrieved from "https://muppet.fandom.com/wiki/Delbert_the_La_Choy_Dragon?oldid=1234228"
Community content is available under CC-BY-SA unless otherwise noted.