Wolle and Pferd have to free Käpt'n Karotte ("Cap'n Carrot") and his treasure from the clutches of pirates, as they have kidnapped him and his ship, holding him captive on the island of Möhrensand ("Carrot Sand"). And of course, Wolle and Pferd are also interested in the treasure. Finchen, Rike and Wolf follow them to help; knowing that pirates are unpredictable. Though these particular pirates are a bit tired...

This is the spin-off's second movie, following season 3's Das Geheimnis der Blumenfabrik, and it is actually part of the show's 4th season. It aired on April 6, 2015 (as a special Easter event), on children's TV network KIKA. For subsequent airings, the film was divided into five individual episodes (all but the final episode reading "to be continued..." as they conclude), to fit into regular Eine Möhre für Zwei airings. The film first aired as a 5-part series beginning September 9, 2015. 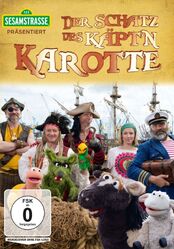 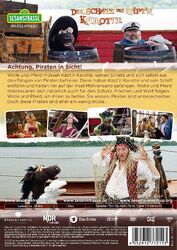 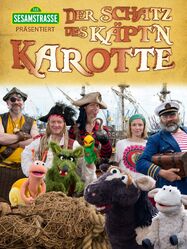 Amazon streaming release artwork
(2017)
Add a photo to this gallery

Retrieved from "https://muppet.fandom.com/wiki/Der_Schatz_des_K%C3%A4pt%27n_Karotte?oldid=1163736"
Community content is available under CC-BY-SA unless otherwise noted.