Dexter was a large monster juggler who appeared on Sesame Street during season 17. He was first seen in Episode 2206, and then appeared in 2212 and 2222. According to his performer, Kevin Clash, he was Sesame's "most spectacular failure."

He was a monster who had a liking to juggling, and rarely stopped, unless he wanted to, which he usually didn't.

Clash discussed the experience in My Life as a Furry Red Monster (referring to the character as "Juggles the Juggler," with Juggles being referenced again in Being Elmo: A Puppeteer's Journey):

“I puppeteered the head of the character and we found a talented artist named Fred Garbo to do the juggling while squatting under the camera's frame. Talk about tough! Trying to coordinate Fred's actions was next to impossible. Fred was the best, but this was asking too much. We spent most of our time in rehearsal rounding up dropped balls, stumbling over one another, and flubbing lines of dialogue - just try concentrating on what you're saying when you've got balls flying around your head.[1]” 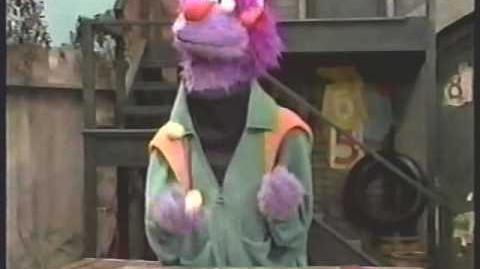 Dexter juggling on Sesame Street
Add a photo to this gallery

Retrieved from "https://muppet.fandom.com/wiki/Dexter?oldid=1273173"
Community content is available under CC-BY-SA unless otherwise noted.