Die Muppet Show is the German dub of The Muppet Show. The series aired on German network ZDF from 1977 until 1982.

The dub was recorded in Munich, Germany, at dubbing studio Beta-Technik.

As part of the partnership between ZDF and Henson/ATV, the original syndication package was not only dubbed but also contained a few specific alterations tailored to the German market, in some ways foreshadowing the international versions of Fraggle Rock. A new opening sequence was prepared, identical to the English language version but with a Die Muppet Show sign, and occasional new footage of Kermit was filmed to better match the German dialog. The show also used the full version of the first season closing (from the Juliet Prowse and Connie Stevens episodes) at the end of every episode (including the episodes with the alternate closings), instead of using the updated closings for later seasons.

The series also included one new guest star, singer Mary Roos, who performed a German version of "Lean on Me" with Rowlf the Dog, Animal, and others, in place of the "In My Life" number in episode 121. This was also one of the few episodes to feature a guest star's singing dubbed completely in German, with Twiggy's "Ain't Nobody's Business But My Own" translated. Another guest star's number that was dubbed is Zero Mostel's "What Do the Simple Folk Do?" The Muppets' solo numbers were mostly dubbed (often with different singing voices rather than the usual speaking voices), but as is common with Muppet Show translations, the guest star's musical sequences were mostly in English, as were many additional spoken dialog contributions within the song from the Muppets.

All new footage for Die Muppet Show was taped in London and later redubbed. Eberhard Storeck, who also supplied character voices, was the dialog director and translator. His contributions included changing the nationality of The Swedish Chef, becoming "The Danish Cook," and replacing his sing-song opening with a chant of "Smørrebrød, Smørrebrød røm, pøm, pøm, pøm," in reference to Danish butter bread.

The variety show Peter Alexander präsentiert Spezialitäten promoted the show two days prior to its premiere in 1977 by stopping by the original UK-set, and taping special footage.

For 2014's film Muppets Most Wanted, the show's title segment for their world tour stop in Berlin, Germany, was recreated using the German co-production's original title, complete with the German article.

Zoot ending shot with the ZDF logo, during which a black screen is now shown.

Despite the custom German logo clearly reading "Die Muppet Show," the show's title has regularly been misquoted in articles, in most TV guide listings, and even on tie-in merchandise as either "Die Muppet-Show" (hyphenated) or "Die Muppets Show" (with a plural "s") from the beginning.

Beside obvious neglect on the part of the press to assure the correct citation of a title, the hyphenation is explained by the fact that, while German words can be joined without any kind of punctuation mark, foreign words would indeed need a hyphen.

The most likely source for the latter misquotation, as can be seen used here 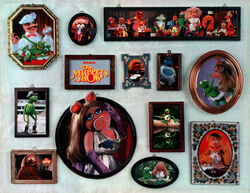 , is most likely the show's own custom German end credits roll, which was inexplicably never corrected throughout the show's entire five season run.

The first official home video release of Die Muppet Show was announced in 2005. After a five year waiting period during which the "unusually complex legal situation"[1] concerning the German dub was decided, Walt Disney Studios Home Entertainment Germany finally released Die Muppet Show: Season One on DVD on December 2, 2010. The second season box set was released on March 24, 2011. The third season box set was released on May 19, 2011.

The dub aired on ZDF from December 3, 1977 to June 5, 1982, omitting only one episode from the broadcast: Episode 207 featuring guest star Edgar Bergen. It was omitted again by the network when it reran other episodes of the show during the summer of 1981. The episode eventually aired on October 19, 1991, over twelve years after its original slot in the show's lineup, when TV network Pro7 had obtained the rights and reran the show in its entirety.

The episode order of the first two seasons was rearranged considerably for the dub, and even released on home video accordingly. The following list provides original episode numbers in parentheses, whenever differing.

This is the first German season to use the original American broadcast order.