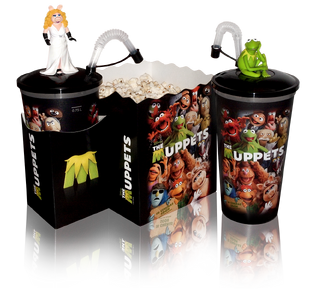 Die Muppets is the German dub of The Muppets. The film was released in German theaters on January 19, 2012 (a record 57 days after the film's US-release date).

It is the first movie to feature major recasts of key characters since Muppets Der Zauberer von Oz, with only very few voice actors remaining to reprise their roles from Die Muppet Show. 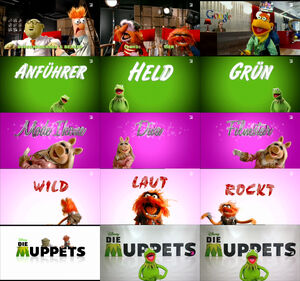 On November 28, 2011, Miss Piggy appeared on website Moviepilot.de (dubbed) with an exclusive message and a brief movie featurette. The website later featured a video of interviews with the cast filmed in L.A. in November 2011, during which Jason Segel and Walter attempt to speak some German.

In early January 2012, British company Lofthouse (together with German ad company Scholz & Friends Berlin[2]) kicked off their campaign of muppetized TV and movie theater ads for Fisherman's Friend in German speaking countries. The brand of strong menthol lozenges uses scenes from the film to describe life with and without the product.

The release date for both DVD and Blu-Ray was announced on January 10, before the film hit theaters. Three special "customer review" videos were created, in which Statler and Waldorf heckle the release. They were posted on Amazon.de as part of the cover art and media section. (Video #1, Video #2, Video #3)

A billboard campaign for The Muppets kicked off on January 12, and a wide variety of print publications offered interviews, stickers and posters to promote awareness, including Familie&Co, teen-mag Bravo, the Disney comic Micky Maus Magazin, the German Vogue, and the online mag Glo Magazin. Die Muppets - Das Magazin zum Film, a German companion magazine for the film packaged with a small stuffed Kermit the Frog, arrived in stores on January 19.

Kermit the Frog, Miss Piggy and James Bobin were in Berlin on January 18, 2012, to promote the film and hold a press conference at Hotel Ritz-Carlton. A contest was held with sponsor airline AirBerlin for a contestant to win a meet & greet with the two attending Muppets.[3] The press conference was covered by a large number of German language news magazines and sites, such as Stern.de.[4]

For the release of the film, Cinemaxx theaters offered a special Muppets-Menü, containing a soft drink and popcorn in a collectible tray, a collector's cup with a Muppet PVC topper (Kermit or Miss Piggy) and one of five Muppet plush key chains (Kermit, Miss Piggy, Animal, Fozzie Bear or Gonzo). The menu cost 7,90 €, the key chains were available separately for 5,50 €. The theater chain UCI Kinowelt offered the same menu, though without the plush key chains, for the same price.

Interviews with Miss Piggy and Kermit in Berlin aired on KI.KA LIVE on TV channel Kika, on Abendschau on TV channels rbb and ARD EinsExtra,[5] and on Radio Energy Berlin, January 19.

At the official press conference in Berlin, Miss Piggy announced that she would appear at a photo op for Berlin Fashion Week, running from January 17 to 22. The pig was on her way to German fashion designer Michael Michalsky's studio in order to try on an exclusive robe that he created for her.

Build-A-Bear Muppet puppets of Kermit and Miss Piggy were released in German stores to coincide with the film's opening. The same puppets are scheduled to be released in US-stores in late February to early March, to promote the DVD and Blu-ray releases of the film.

On January 22, 2012, TV-channel SAT.1 Comedy showed a 15-episode best-of marathon of Die Muppet Show. The channel began airing the show around Christmas 2011; the first time that the show graced German TV in about a decade.

Renowned weekly newspaper Die Zeit posted two essays in their series Ich habe einen Traum (I Have a Dream) on January 25, 2012; one written by Kermit, one written by Miss Piggy. The editorials are illustrated with a black and white photo each, as is tradition with the series. The essays can be downloaded in PDF-form, and for subscription members, the essays can also be found as audio files. Previous contributors include Dave Grohl, Elvis Costello, Michael Bublé, Christian Louboutin, Snoop Dogg, John Malkovich, Lena Meyer-Landrut, Ozzy Osbourne, Will.i.am, Miley Cyrus, John Landis and Homer Simpson.[6][7]

On January 26, Miss Piggy appeared on episode 16 of neoParadise on ZDFneo, hosted by Klaas Heufer-Umlauf and Joko Winterscheidt, the latter coincidentally hosted the German press conference for Die Muppets. In a trailer for the episode, Winterscheidt admitted to have fallen in love with the pig, who in turn swayed back and forth between being attracted to, and being weirded out by the host.[8]

On January 27, German rapper Marsimoto released his cover version of "It's Not Easy Bein' Green." The song was recorded together with Kermit, while the frog was in Berlin to promote the film. It further cross-promotes the rapper's solo album Green Velvet.[9] 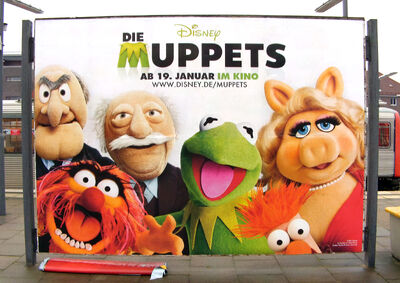 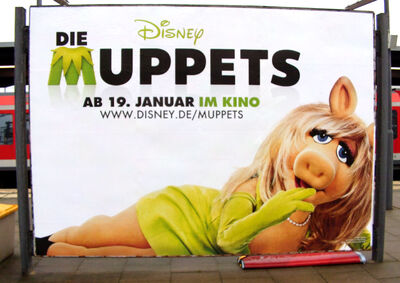 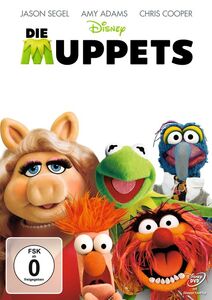 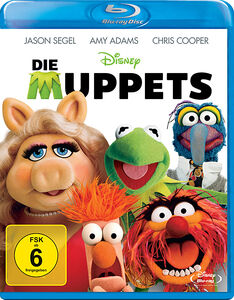 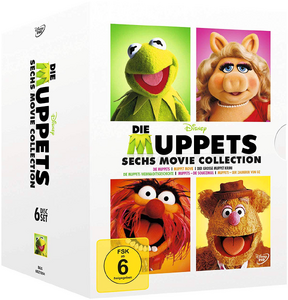 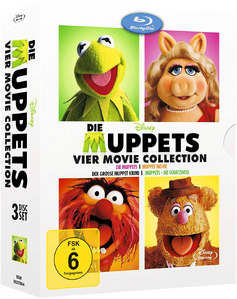