Die Muppets erobern Manhattan is the German dub of The Muppets Take Manhattan. The film received theatrical release in West Germany on March 22, 1985 (252 days after the film's US-release date). It was never released in East Germany.

It was the last German dub to feature most of the same voices heard on Die Muppet Show, with Eberhard Storeck once again directing the dub and adapting the dialog. In contrast to the Muppet Show characters, not all Sesame Street characters appearing in the finale wedding scene were dubbed by their original Sesamstrasse voice actors (in part due to the film having been dubbed in Munich, as was Die Muppe Show, and Sesamstrasse in Hamburg).

The American Blu-ray release of the film features the German dub as an option.

The film was promoted by an appearance of Uncle Traveling Matt on Grosse Show für kleine Leute a few months prior to the 1985 theatrical release. 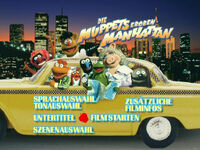 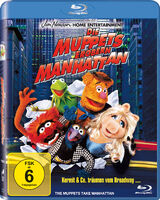 Blu-Ray release
November 10, 2011
Add a photo to this gallery

Retrieved from "https://muppet.fandom.com/wiki/Die_Muppets_erobern_Manhattan?oldid=1334656"
Community content is available under CC-BY-SA unless otherwise noted.