Reporter Jörg Böckem met with Miss Piggy and Kermit the Frog while they were staying at the Ritz-Carlton Hotel in Berlin to promote Die Muppets to interview them for Die Zeit. Both Muppets posted an essay in the paper's series "Ich habe einen Traum (I Have a Dream)," illustrated with a black and white photo of each, shot on location.

For Muppets Most Wanted, a Berlin-set was created for the April 7, 2014, location shoot in Greenwich, UK. The changes to the public place included a piece of the Berlin Wall, German street and subway signs, as well as a "Die Zeit" newspaper stand warning (in mock-German) of Constantine. 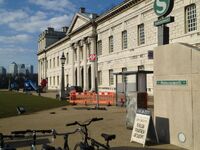 Muppets Most Wanted Berlin set in Greenwich, UK (April 7, 2013)
Add a photo to this gallery

Kermit graced the cover of both the newspaper, and its weekly magazine in late March/early April 2014.

Wikipedia has an article related to:
Die Zeit
Retrieved from "https://muppet.fandom.com/wiki/Die_Zeit?oldid=1285378"
Community content is available under CC-BY-SA unless otherwise noted.