The Dingers are a species of Sesame Street characters. They are very similar to Honkers, except that instead of communicating by honking their noses, they ring the bells on their heads to speak. The species was introduced in Season 13, first appearing in Episode 1578.

Originally, only one Dinger was used primarily, but others have since appeared. The original Dinger was employed as a bellhop at The Furry Arms Hotel, appropriate since his own bell could be rung for service (usually provided by Benny Rabbit).

A few songs have focused on the Dingers and their unique talent, including "The Ding-Along Song" and "The Honker-Duckie-Dinger Jamboree" (Martin P. Robinson performed the Dinger in the latter).

Episode 3824 featured a Ding-Along; and in Episode 4028, Elmo impersonated a Dinger for an impromptu Honker-Duckie-Dinger Jamboree. Isabel of The Furchester Hotel is a cousin of the species. 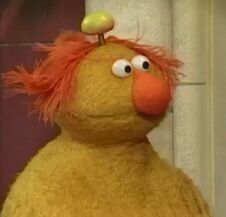 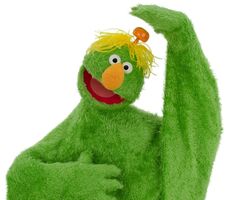 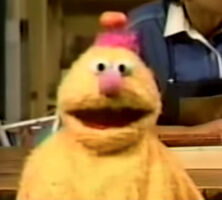 Retrieved from "https://muppet.fandom.com/wiki/Dingers?oldid=1253471"
Community content is available under CC-BY-SA unless otherwise noted.