Disney's Honorary VoluntEars Cavalcade was a pre-parade attraction at the Disneyland and Walt Disney World resorts. Part of the 2010 "Give a Day. Get a Disney Day." campaign, the procession, which ran ahead of the daily parades, featured Miss Piggy, Kermit and Sweetums along with Honorary VoluntEARS who served as Grand Marshals of the parade. For their participation in the parade, Grand Marshals were given a button as a souvenir of their experience.

Slightly larger versions of Piggy and Kermit were built to last longer through wind and rain. These puppets were later used for live appearances during the original theatrical runs of The Muppets and Muppets Most Wanted at the El Capitan Theatre.

Kermit and Piggy on their float unit for the parade in Walt Disney World.

Kermit and Piggy on their float in Disney World 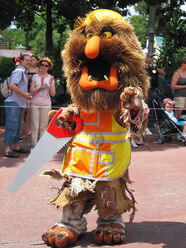 Sweetums on a rainy day in Walt Disney World.

Piggy and Kermit in the rain... 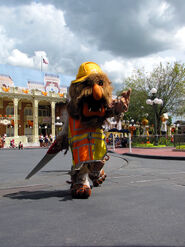 Kermit and Piggy on their float in Disneyland... 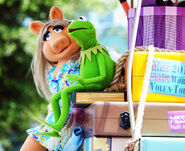 Add a photo to this gallery
Retrieved from "https://muppet.fandom.com/wiki/Disney%27s_Honorary_VoluntEars_Cavalcade?oldid=1083265"
Community content is available under CC-BY-SA unless otherwise noted.