Disney Xtreme Digital (also known as DxD, not to be confused with the Disney XD TV channel) was an online network on Disney.com that showcased exclusive Disney content such as videos and music. It allowed registered users to create their own personalize "channels", collect "D-points", and participate in specialized social-networking features with other users. The Muppets launched their own official Disney Xtreme Digital channels located at Muppets.com in February 2008.

The main focus of the site is on the collection of newly created video sketches produced exclusively for the DxD site. The site launched on February 1, 2008 with a collection of 10 original videos and new videos have been added weekly since. As of January 2009, there are over 100 original videos.

The initial round of videos were written by Jim Lewis and Kirk Thatcher and were directed by Bill Barretta. Jim Lewis comment on the making of the videos stating:

“The goal is to provide maximum entertainment, to give new and old friends a taste of what the Muppets are all about. I personally think this is a fantastic venue for the Muppets. It's a self-contained environment. Like a sketch on a variety show (for those old enough to remember variety shows), it serves no purpose but to entertain! Here the Muppets can truly be themselves. They just do what they do when they think you’re not looking. That's been a boon to my co-writer, Kirk Thatcher, and I, but also to the performers who worked on this first round of spots. They could play and explore the characters’ personae without having to carry a story or make a certain statement.[1]”

Steve Whitmire commented on the production of the videos in a 2008 interview stating:

“I love that stuff. That was kind of the first indication to me that we were in a good place with Disney. All of the sudden, we were doing that kind of stuff, those short little bits. It's a great way to reintroduce the Muppets to people who don't know them.[2]”

In 2008, Muppets.com was nominated for "Outstanding Short Form Entertainment" in the first and only ceremony of the Global Media Awards.[3]

In February 2011 the site received a slight design overhaul, the Disney Xtreme Digital features (channels and D-points) were removed and it reverted back to Muppets.com. The site was further made available internationally again, apart from the regionally restricted games section.

In May 2011, the site opened up with trailers for The Muppets. 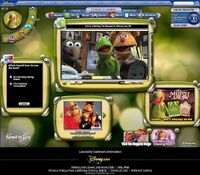 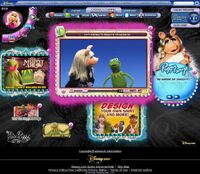 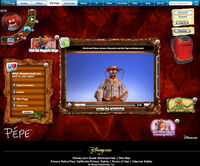 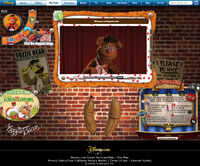 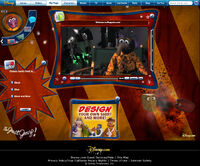 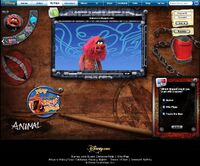 Videos are viewable from the main video player on the site, as well as the "videos" section.

Better Living with Bobo the Bear

Moi's Thought for the Day

The Weird World of Gonzo

"Do Not Touch" button

Amid the objects seen on the Muppets' main stage is a red button labelled "Do Not Touch". Clicking on the button causes random Muppet characters to pop-up in a variety of special live action videos. Possible results are as follows:

Miss Piggy asks if "you go online dressed like that?"

Animal looks for his pet bunny.

Bunsen and Beaker add more ram to your computer.

Kermit (nephew of a chameleon) changes his colors.

Animal runs into the screen.

Fozzie and Fozzie carry a ladder

Miss Piggy asks you to cut it out; she's losing her beauty sleep.

Miss Piggy gets annoyed at you for clicking the button and karate chops the screen.

Gonzo paddles by in a bucket until it springs a leak and sinks.

Pepe and Rizzo get annoyed at your clicking of the red button.

Fozzie does an impression of the US Constitution's Second Amendment.

Kermit gives us a lesson from the swamp and tell us to "Seize the Day" or in Latin, "Carpe Diem," which he think means seize the carp.

Kermit gives us another lesson from the swamp and tell us, "Things are always changing. And you can never step in the same stream twice." This is especially true when the stream is filled with alligators.

Big Mean Carl shakes a cow since it is time for a milkshake.