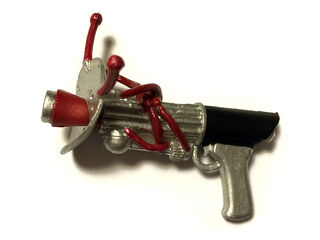 A Dissolvatron is a hand-held device used by Dr. Julius Strangepork in the Pigs in Space sketch from The Muppet Show episode 314. It is an invention of his own design, perfected in space on board The Swinetrek, that enables the user to dissolve and "un-dissolve" solid objects targeted by its energy beam.

Strangepork provides a demonstration on a green beverage by making it disappear and reappear on opposite sides of the ship's console. To further illustrate the capabilities of the dissolvatron, he points the ray at Captain Link Hogthrob and First Mate Piggy causing them to fade away. The pair immediately reappear after a discharge from the device, but not quite "exactly as we were before" as the two have switched bodies.

Demanding an explanation, they turn to Strangepork who himself has become inhabited by Janice, whose body then walks through the doors of the bridge. Piggy (still in Link's body) calls for Kermit's help, who enters with The Swedish Chef, their bodies having been swapped as well. The invention appears to have had an effect far outside the scope of its intended target. The mix-up resolves off-screen, never explaining if the dissolvatron was again used to correct the situation, or if the effect was temporary.

The Dissolvatron was later used by Super Sheep in episode 419 to defeat the wolf in "The Whiffenpoof Song", although by this point, its function is simply as an explosive blaster.

The Julius Strangepork Action Figure released by Palisades Toys in 2003 came equipped with a dissolvatron toy. 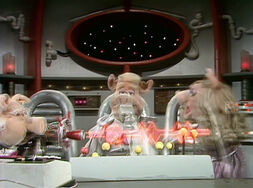 Add a photo to this gallery
Retrieved from "https://muppet.fandom.com/wiki/Dissolvatron?oldid=1083273"
Community content is available under CC-BY-SA unless otherwise noted.