Doc's Workshop is one of the major locations of Fraggle Rock, seen in every episode. Formerly an abandoned old room adjacent to Doc's house, Doc refurbishes it as a workshop in "Beginnings," supplying a space for him to work on his inventions. Though Doc sleeps in the other part of the house, the workshop is home to Sprocket's bed and food dish, generally located just beyond Doc's workbench. The workshop is generally littered with tools and bric-a-brac ranging from a ship in a bottle to an antique radio. A front porch area is located just outside the workshop.

Doc's workshop is connected to Fraggle Rock through an old hole in the wooden wall paneling. This hole serves as the portal to what the Fraggles consider to be Outer Space, which encompasses Doc's workshop and all outside, human environs. Sprocket often poses a hazard to Gobo Fraggle when he ventures forth to collect Uncle Traveling Matt's postcards. Doc's workshop also supplies water to Fraggle Rock, via the ever leaking pipes; Doc often attempts to repair the boiler, and is frustrated by the clanging pipes, actually banged by the Fraggles, which causes him to turn on the water.

In the animated version of Fraggle Rock, Doc's workshop remained a key location. The set itself was used for live-action frame sequences in which Uncle Traveling Matt would introduce the episodes, and appeared within the animated sequences, often through photographic backgrounds. 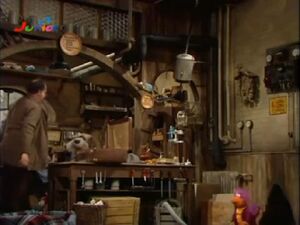