The Dodos are a family of dodos living at 35 Canary Row in Oceanview, Illinois. In the Sesame Street film Follow That Bird, they briefly acted as Big Bird's foster family, but, while well-meaning, they served only to remind Big Bird where his real family is: on Sesame Street.

The Dodos were clueless and often lacked awareness of their surroundings. Their daily family activity consists of hunting for worms. They tried to make Big Bird comfortable in his new environment, but they often disregarded Big Bird's feelings and did not want him associating with anyone who was not a bird like themselves. This prejudice upset Big Bird.

There are four birds in the Dodo family: 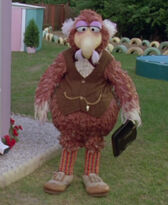 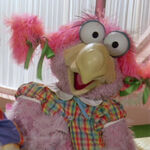 Marie Dodo
Add a photo to this gallery

Retrieved from "https://muppet.fandom.com/wiki/Dodos?oldid=1126177"
Community content is available under CC-BY-SA unless otherwise noted.