Doglion is a full-bodied Muppet monster who was featured on The Muppet Show and more sporadically thereafter. Notable sketches include an interpretation of "Beauty and the Beast" with Lesley Ann Warren, singing with Sweetums and Cloris Leachman, and filling the role of destructive monster in the Happy Girl Meets a Monster sketch with Madeline Kahn.

He holds the distinction of being the first Muppet to ever grace the silver screen as evidenced in the opening shot of The Muppet Movie, walking through the backlot as the camera pans down from the World Wide Studios statue. Shortly later, he "takes" a seat Miss Piggy had saved for Kermit.

He also appeared in the 1990 The Cosby Show episode "Cliff's Nightmare," alongside a number of other Muppets (mostly from The Jim Henson Hour).

He appeared in three episodes of Muppets Tonight. The most notable was in episode 107. As the punchline to a riff on the famous Mah Na Mah Na sketch, with Kermit and Sandra Bullock, Doglion manifests when Sandra says "Shave and a haircut" (to add "Two bits").

Doglion made his first appearance in nearly two decades at The Muppets Take the Bowl in 2017, participating in "The Muppet Show Theme."

The name "Dog-lion" was previously used in a storyboard for a Wilkins Coffee commercial, drawn by Jim Henson in the late 1950s. This storyboard features Wontkins being eaten by a Wilkins-drinking creature, who is described in Henson's notes as a "monstrous dog-lion-beast."[1] 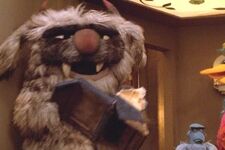 Doglion grabs a seat to watch The Muppet Movie. 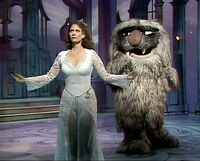 "Beasty and the Beaut"