Don't Be Shy is a Sesame Street storybook published in 1987 featuring Mr. Snuffleupagus.

Snuffy's got a bad case of shyness. He doesn't want to be in a group photo Olivia is taking, twirl a jump rope with Big Bird, or meet his visiting great aunt. He is also reluctant to ask David for some baseball cards at Hooper's Store, and when he visits Grover's for lunch, he is too shy to ask for a second helping of spaghetti. Things get worse when the mayor awards Snuffy first prize for his best painting at the Sesame Street Art Fair ("Still Life with Cabbages") and Snuffy refuses to show himself and accept his blue ribbon. At play group, he's too shy to participate in the activities, such as show-and-tell and music (where everyone else sings the Sesame Street Theme). Even at his birthday party, he won't come out to open his presents or have fun (only briefly coming out to blow out his candles with his snuffle). But at a play put on by Prairie Dawn, The Sesame Street Weather Play, where he's playing the sun, he won't show himself. Eventually, when he realizes what an important part in the show he is, he conquers his shyness and comes out, enjoying himself.

This book marks the first appearance of Snuffy's great-aunt Aunt Agnes, who later appears in two more Sesame Street storybooks. In this book, Aunt Agnes is visiting from Hawaii, but Snuffy is too shy to say hello to her.

In at least two illustrations, Oscar the Grouch is drawn with five fingers instead of the usual four fingers. 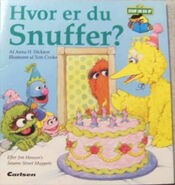