Bob Hope rides Paul Revere and sings "Don't Fence Me In" in episode 221 of The Muppet Show.

The song was originally written for an unproduced show called Adios Argentina in 1934. It was later made famous by Roy Rogers in the 1944 film Hollywood Canteen, and subsequently recorded by many artists.

Behind the scenes footage of filming this number was shown at a release event for The Muppets Character Encyclopedia at the Museum of the Moving Image.

Rowlf the Dog previously sang the song with Jimmy Dean (portraying his country-bumpkin cousin Calvin) in episode 227 of The Jimmy Dean Show. 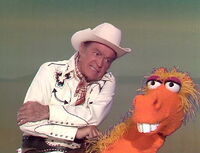 Add a photo to this gallery
Retrieved from "https://muppet.fandom.com/wiki/Don%27t_Fence_Me_In?oldid=1159025"
Community content is available under CC-BY-SA unless otherwise noted.