Don Music is an agonized composer who made recurring appearances on Sesame Street, starting in Season 6 (1974).

A typical sketch involved Kermit visiting Don in his studio while he tried to write a new song. To help alleviate Don's frustrations and stop him from banging his head against his piano, Kermit would make suggestions and correct Don's mistakes. The usual result was that Don would write a strange version of a nursery rhyme, such as "Mary Had a Bicycle" instead of "Mary Had a Little Lamb." When he finished, he would perform the song, and would normally be joined by back-up singers (often Little Chrissy and the Alphabeats), who would appear seemingly from out of nowhere, or come through the door to his studio. When the character started appearing in street scenes, he was shown writing original songs not based on established compositions.

Don always kept a picture of Sesame Street songwriter and composer Joe Raposo on the wall, while on his piano he often kept a bust of either Ludwig van Beethoven or William Shakespeare.

Don also appeared in the View-Master Interactive Vision video Let's Learn to Play Together and the TV special, Sesame Street: 20 and Still Counting.

His last new appearance on the show was in Episode 2826, but his segments continued to air as part of new episodes until the end of Season 29 in 1998. According to Sesame Street Unpaved, which was published the same year, "The character, played by Richard Hunt, was abandoned because of complaints about his alarming tendencies toward self-inflicted punishment. Apparently, kids were imitating his head-banging at home."

Though absent as a character for decades, Don Music resurfaced in new appearances associated with the show's 50th anniversary, performed by Ryan Dillon. He appeared at San Diego Comic-Con in 2019 in the "Sesame Street Puppets Live!" show[1], the special Sesame Street's 50th Anniversary Celebration[2] (where host Joseph Gordon-Levitt mistakes him for Guy Smiley), and in the 2019 Macy's Thanksgiving Day Parade. He also made a cameo in the 2019 animated music video "Christmas with the Count." (YouTube) 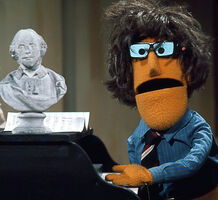 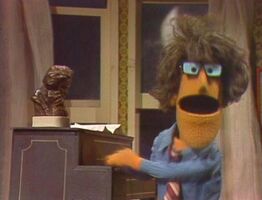 In "Mary Had a Bicycle", a bronze bust of Beethoven sits atop Don's piano. Sketch by Jim Henson.
Add a photo to this gallery

Retrieved from "https://muppet.fandom.com/wiki/Don_Music?oldid=1252417"
Community content is available under CC-BY-SA unless otherwise noted.