Don Pimpón was one of the main Muppets on Barrio Sésamo, the Spanish co-production of Sesame Street, appearing from 1983 to 1987.

A monster from an unknown species, Don Pimpón had been living at the Barrio Sésamo for some time when Espinete moved there in 1983. Other people in the Barrio do not seem to consider Pimpón strange, although he is a large, brown-furred monster, strong enough to break a (paper) wall when simply leaning on it.

Don Pimpón behaves as an adult, becoming one of the father figures for Espinete. Some consider that Don Pimpón feels a certain amount of rejection by human characters and can relate more easily to another Muppet; however, everybody thought of Don Pimpón as "one of us."

In contrast to Espinete, Don Pimpón wore clothes, which might suggest a humble origin or occupation. Don Pimpón was never seen without any of his clothes, not even his hat.

Although Don Pimpón dressed in a farmer's clothes, he did not seem to work on a farm. Apparently, Don Pimpón did own and manage a store, although the exact products he sold are not known. Don Pimpón also used to travel around the world, bringing presents for everybody in the Barrio when he returned.

Don Pimpón did not interact with any other characters from Sesame Street, except for Espinete and the humans in the Barrio (in contrast to Espinete's references to "his friends Ernie and Bert"). He took part in any collective activity, including parties and songs, usually with him not being the main voice. The exception to this rule was "La canción de Don Pimpón" ("Don Pimpón's song.")

The prefix "Don" is the Spanish equivalent to "Mr.".

Pimpón, of course, is not a Spanish Christian name, aiming only to rhyme with Don.

Don Pimpón was bigger than a human, and his mouth must be operated using Alfonso Vallejo's hand, as a hand puppet, similar to Big Bird. Thus, Vallejo had only one arm available. Using a string, Vallejo's movements with one arm were followed by a similar but opposite movement of Don Pimpón's other arm (If Vallejo moved his left arm towards the front, the right arm moved towards the back). Espinete was operated similarly.

In 2014, Vallejo revealed the nature of Don Pimpón in interviews to the Spanish press: A representation of Vallejo himself. Following his words, in the 1980s, Vallejo (a bearded man with a hat and plaid shirt) was made to pose for front, side and other reference photographs; then, the Jim Henson Workshop was asked to make a puppet representing that person.[1] This was not revealed to the Spanish audience, who speculated that Don Pimpón may have been an owl or a scarecrow.[2] Don Pimpón referred to himself as "a pimpón" whenever Espinete identified himself as a hedgehog.[3] 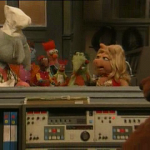