The Doozers are a race of characters from Fraggle Rock who love to work. They're tiny, green creatures with small nub-like tails who usually sport construction helmets, boots, and tool belts. Doozers stand approximately knee-high to Fraggles, at six inches tall.[1]

Unlike Fraggles, Doozers love to work all day long, and they hate playing games. When compared to the other races within Fraggle Rock, they are by far the most technologically advanced. Most Doozers are construction workers, while others are architects or miners. With the help of various Doozer machines and vehicles, they build elaborate constructions all over Fraggle Rock, like towers, buildings, roads and bridges.

Their building materials, Doozer sticks, are made of radish dust. Doozer Sticks are the Fraggles' favorite snack, and they love to eat the buildings that Doozers build. The Doozers don't mind their buildings being eaten, and making their building materials out of the Fraggles' main food source was not a coincidence; when the Fraggles' food source in the past was mushrooms, that's what Doozer sticks were also made of. If the Fraggles didn't eat the constructions, the Doozers would run out of building space, and if they ran out of building space, they would have to move away from Fraggle Rock or else they would die. While Doozers are capable of finding other tasks to occupy their time (such as knitting), this simply slows the process and are also considered far less pleasant than building.

Doozers and Fraggles usually show very little respect towards each other. It's very rare for Fraggles and Doozers to make friends. Cotterpin is one of the few Doozers who likes to communicate with them.

The Doozers all live together at Doozer Dome. They work together in a society that values cooperation in order to further the common good (which is very much contrary to the Fraggles, who place a high value on individualism and independence). The Doozers pride themselves on the good work that they do, but no Doozer is allowed to take personal credit for their work -- that would mean that they thought their work was better than everyone else's and would be destructive to the communal spirit. Competition is seen as a vice that occasionally afflicts Doozers. Again, this is very unlike the Fraggles, who love to have races and competitions, and who take pride in their individual jobs and passions.

The Doozers' diet is rarely mentioned. However, it has been mentioned that a favorite is a jelly filled food pellet (which is never available; they only have custard).

Main Doozer characters on the show include Cotterpin, her parents Flange and Wingnut, her best friend Wrench, and the Architect Doozer. Nearly all the Doozers are named after tools or construction equipment, with the odd few named after computer equipment.

Doozer helmets come in red, orange, yellow, blue, purple, pink and white. A higher rank of Doozer is a Bull Doozer and they have a disk on their helmet to signify their rank. Bull Doozers named as such in the series are Modem Doozer and Flange Doozer. In the episode All Work and All Play Wingnut Doozer is shown to be a Bull Doozer but lacks the disked helmet in the episode The Doozer Contest.

The Doozer puppets and their vehicles are performed with radiographic controls, usually with the help of a waldo.

In The Woozle World, Jim Henson's original concept and pitch for the show, Doozers were referred to by the placeholder name of "Wizzles". Jocelyn Stevenson recalls that various names were considered, including Workalots, Drudgies, and Rgllmzaxpoops, before settling on Doozers.[2]

According to a sketch included in the Fraggle Rock: Complete First Season DVD, the Doozers' construction equipment is powered by hydroelectricity generated from the flow of water from the Fraggle Pond to the underground river that leads to Doc's town's water supply. The plant was never depicted in the original TV show, but was later incorporated into Fraggle Rock: Back to the Rock.

The world of the Doozers expanded beyond the confines of Fraggle-based storytelling in the form of their own animated series, The Doozers, adding several characters including Daisy Wheel, Flex, Spike, and Molly Bolt.

The tiny Doozers' size, in relation to Gorgs and Fraggles 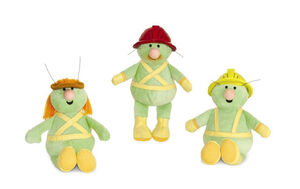