The show premiered in Australia on October 7, 2013, with new episodes airing weekdays at 9AM on Nick Jr via Australia's subscription television service, Foxtel. The Doozers debuted in various territories across Europe (including the UK), the Middle East, and Africa via Turner's preschool channel Cartoonito in October 2013. It also made its way to Discovery Kids Latin America and Cartoon Network Asia. A German dub premiered on December 13, 2013, on pay-TV channel Boomerang.

The series premiered in the United States exclusively on Hulu on April 25, 2014.

Doozers are three inch tall, green characters who live in communities (just beyond the view of humans) all around the world. The new animated series is set in Doozer Creek, a high-tech enchanted forest that merges nature with innovation. It’s a self-sustaining, green community that exists in harmony with nature and generates zero waste. In every eleven-minute episode of Doozers, viewers will follow the adventures of four brand new Doozer kid characters: Spike, Mollybolt, Flex, and Daisy Wheel, each with differing characteristics and skills. Together they make up the bright, bold, and fun “Pod Squad” who share a passion for inventing.[3]

“Daisy Wheel is the youngest, cutest, and smallest member of the Pod Squad, but she's not shy; she always shares her thoughts and ideas. When the team is going off track, Daisy Wheel is the first to let them know! Like many great inventors, Daisy’s observations of nature inspire her work and play. She loves all animals, and her answer to most of the Pod Squad’s problems is: “Let’s Ask Nature!”. She loves puzzles, singing, and turning everything into a game to help explore and understand her world. Daisy Wheel brings cheer and excitement to every project the Pod Squad takes on!.[4]”

“Need a friend to help build a remote-controlled mini solar system on your bedroom ceiling, or a catapult for launching radishes across town? Then Flex is your Doozer! Flex loves to paint, hammer, put up and knock down all kinds of creations. Flex lives on his grandparents' farm and he uses his bedroom as his workshop. He also drives the Pod Squad’s Podmobile, captains the Podblimp, and is often the "test pilot" of new inventions (especially if they are treats or toys!).[5]”

“There is NOTHING too big for Spike to imagine – then help to build and try out! He has a million ideas and is just bursting to try them all. He’s the one that pushes the Pod Squad members into action, and his ideas sound like so much fun that it’s hard for them to say "no"! More than the others, Spike is willing to take risks. He likes to take things apart to figure out how they work, and he uses his digital Doozigner tablet to dream up lots of possibilities. Like any great inventor, Spike doesn't worry too much about mistakes or problems. Spike’s mum is the Chief Doozer of Doozer Creek and his little sister is Daisy Wheel.[6]”

“Molly loves organizing all kinds of events for her friends, whether it’s a picnic in the treetops or ice-block sledding down the grassy hills. One of her favorite phrases is "You know what would be FUN?". She loves planning, list-making, maps, and graphs – she has a giant map of Doozer Creek on her wall to help get her where she needs to be. She helps keep the group organized and on track, but when she’s not spending time with the Pod Squad, Molly likes to design and make her own accessories. So if a Doozer wants to decorate their hardhat, Molly's the one to see! Molly Bolt lives in a treehouse with her father, Baker Timberbolt, and mother, Chief Architect.[7]”

“Who could forget the industrious little Doozers who wore hard hats as they cheerfully labored alongside the Fraggles, building scaffolds composed of 'Doozer sticks' made of 'radish dust'? Now the Doozers are back to inspire kids to make the world a better place by making smart, eco-friendly choices, and by inventing tools, gadgets, buildings, structures, and other technology that supports the environment’s ecology.”

The series was produced by The Jim Henson Company with Decode Entertainment.

The series was presented for sale at television industry conference MIPTV in 2009. A March 2009 press announcement stated that test animation was being made, with the series to comprise 52 eleven-minute episodes (or 26 half-hour broadcast episodes). Production was originally planned for fall of 2009 with release estimated for fall 2010; however production was delayed as the Henson Company continued to seek out broadcasters.[8]

On July 3, 2012, a press release from DHX Media (parent company of Decode) announced that the production had been greenlit and the series would begin production in July 2012 at DHX computer animation studio in Hallifax, Canada. The press release also noted that the Jim Henson Company was still "in negotiations" with broadcasters around the world to sell the series, and would be presenting it yet again at the MIPJunior and MIPCOM events.[9]

On September 12, 2012, it was announced that the series would be released coinciding with the 30th anniversary of Fraggle Rock in 2013. 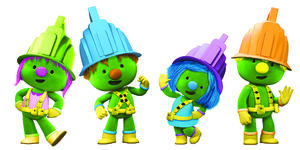 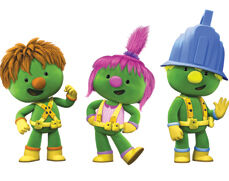 Episodes are 11 minutes each.

Molly and her friends put on a puppet show.

The little Doozers work together to help Professor Gimbal build a dock.

The Pod Squad work together to find Flex's missing Doodriver.

The Pod Squad invent a Music Muffling Cocoon to block the sound of Chief Doozer's instrument.

The Pod Squad work together to open a Mystery Box.

Flex and the Pod Squad learn about art.

The Pod Squad find a new home for baby radishes to grow.

After the Fall Foliage festival, the Pod Squad learn what to do with extra leaves.

The Pod Squad want to break the Doozer World Record for the largest Dippleplant.

An uninvited bird has moved into Molly's house and the Pod Squad decide to make it a new home of its own.

The Pod Squad work together to get a fallen egg back to its nest.

The Pod Squad help Professor Gimbal get a photo of the rare Blue Beaker.

At the Doozer World Expo, the Pod Squad create their own pavilion.

At the Doozer World Expo, everyone prepares for the big show.

At the Doozer World Expo, it's time for the Invention Contest.

At the Doozer World Expo, everyone works together to build a tall tower.

Molly gets a new vehicle.

The Pod Squad are entered in the Doozer Derby. Let the race begin!

Baker Timber Bolt made too many muffins and it's the Pod Squad's job to get them to hungry Doozers all over Doozer Creek.

The Pod Squad help Baker Timber Bolt at the bakery.

It's time for the Doozer Creek hot air balloon race and the Pod Squad is ready!

The Pod Squad help Professor Gimbal land his blimp on a foggy day.

The Pod Squad work together to get a lost butterfly back to his flutter.

Professor Gimbal is tired and frustrated.

The Pod Squad comes up with a new way to re-use Professor Gimbal's old inventions.

The Doozer Creek baking contest is about to start!

Flex learns what to do with his broken hard hat.

Professor Gimbal creates a new machine called the Windy Wonder, but what's it for?

The Pod Squad is busy working away at a new playground in Doozer Creek.

The Pod Squad want to get Professor Gimbal a gift.

Baby Pinball just won't crack a smile, but the Pod Squad is determined to make him laugh.

It's Spookypalooza and the Pod Squad are excited to make the spookiest pumpkin ever!

The Pod Squad learns the story behind Spookypalooza: The Legend of Doozer Creek.

A broken Peach Picker inspires the Pod Squad to invent a new way to get the peaches off the trees.

A broken invention blows bubbles all over Doozer Creekand the Pod Squad must find a way to stop them.

Chief Doozer asks the Pod Squad if they will clear the playground.

Daisy Wheel wants to skate with the others, but she doesn't know how.

Grandma and Grandpa Grip take the Pod Squad on a mapping adventure.

The Pod Squad visit their friend Zippa who lives in the Desert.

The Pod Squad complete a scavenger hunt without their usual tools.

The Pod Squad work together to power up an old train for one more ride around Doozer Creek.

It's a very special night in Doozer Creek.

A comet is coming to Doozer Creek.

The Pod Squad is excited when Professor Gimbal gives them a Doozermahoozit.

The Pod Squad work together to get radishes across the ravine when the bridge breaks.

Inspired by nature, the Pod Squad invent new instruments for the Starlight Concert.

Doozer Doodad learns how to dance with the Pod Squad's help.

The Pod Squad want to play their instruments on a windy day.

Episodes are 22 minutes, with two stories each.

The Pod Squad must find a way to keep their vehicles clean for the Doozer Creek Car Show. / The Pod Squad explore ideas for the best gifts to give the Desert Doozers on Gift Exchange Day.

When Doozer Creek's ketchup supply runs low, the Pod Squad learn how to make their very own yummy ketchup. / Professor Gimbal challenges the Pod Squad to find their way home from the forest without using their gadgets.

Objects are disappearing in Doozer Creek, and it’s up to the Pod Squad to figure out why! / Dandelion seeds invade Doozer Creek and threaten to turn everywhere into a Dandelion jungle!

The Pod Squad help Molly find inspiration for art from the world around them. / The Pod Squad make Crash Test Dummies of themselves to test out their new mega-slide.

Doozer Creek needs to be protected from an impending avalanche. / The Pod Squad learn how to make a rainbow after Daisy misses seeing one.

The Pod Squad learn about chrysalides while protecting a butterfly cocoon from a windstorm. / The Pod Squad make use of a fallen tree by engineering it into an obstacle course.

The Pod Squad go searching for an elusive Doosquatch when strange lights and sounds are observed. / The Pod Squad learn that rushing the build of their new clubhouse does not produce the desired results.

The Pod Squad must use their engineering skills to retrieve a crane from the bottom of a deep hole. / When Zippa tells the Pod Squad she's never tasted a peach, they put their brains to work to bring her one.

The Pod Squad takes part in the Doocathlon, using Doozer-powered vehicles of their own design. / The Pod Squad put their engineering skills to use to harness the wind when Zippa invites them to try sand surfing.

Retrieved from "https://muppet.fandom.com/wiki/Doozers_(series)?oldid=1245686"
Community content is available under CC-BY-SA unless otherwise noted.