The Dr. Teeth Action Figure was released in the first series of Muppet Show action figures produced by Palisades Toys as part of the show's 25th anniversary marketing campaign. As the first representation of Dr. Teeth without his hat, this action figure revealed that he had a bald spot on top of his head. Dr. Teeth's hat was a loose accessory that was designed to fit into two strategically placed notches in his head.

The Dr. Teeth Variant Action Figure, a repainted version of the standard figure, was sold as an exclusive at the Wizard World East convention. It was the first publicly sold figure in the line. 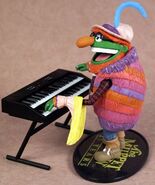