Drawn Together was an animated series on Comedy Central aimed at mature audiences. The series revolves eight animated characters living in a house together in a setup similar to The Real World.

When Clara said having a suicide hotline is going to be fun, Foxxy reminded her of the time when Clara adopted pitbulls and Foxxy had to find them a new home with the Muppet Babies. The scene cuts to two pitbulls viciously ripping apart Baby Kermit and Baby Gonzo. In the DVD version of this episode, a slightly longer version of this clip is shown which also features Baby Fozzie already attacked and Baby Scooter being anal-raped by another pitbull.
In another scene when one of the hotline telephone started to ring, the characters Foxxy Love, Princess Clara, Spanky Ham, and Ling-Ling all have triangular mouths and go "Yip yip yip yip yip...", like the Martians segment from Sesame Street. This scene is also repeated in the ending credits. Episode director Peter Avanzino confirmed this on the Yahoo Group where he found the clip. [1] 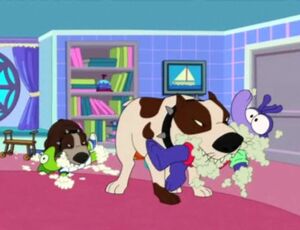 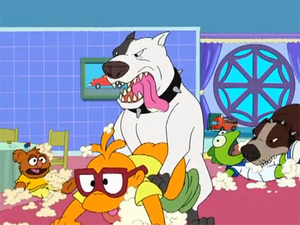 Extended DVD scene
Add a photo to this gallery

This episode spoofs Muppet Babies by telling the story of the characters as they were babies living together in a nursery. The opening theme is replaced with a direct spoof of the Muppet Babies opening sequence and portions of the episode cut to old black and white stock footage (ala the live-action cutaways on Muppet Babies). 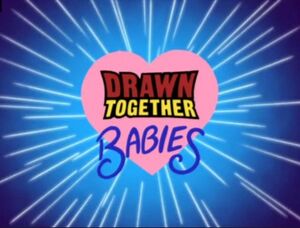 The Drawn Together Babies logo,
reminiscent of another shining logo with heart 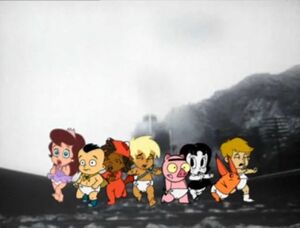 Visit the:
Drawn Together Wiki
Retrieved from "https://muppet.fandom.com/wiki/Drawn_Together?oldid=1175680"
Community content is available under CC-BY-SA unless otherwise noted.