In honor of Michael Horn receiving the "2004 Maryland Entrepreneurial Success of the Year" Award on May 14th 2004, Palisades Toys produced this repainted version of the Tuxedo Gonzo Action Figure, in a flashy light blue tuxedo. It was given to guests that attended the Maryland Small Business Awards Breakfast.

Like other Gonzo figures excluding the Stuntman Gonzo Action Figure, the head sculpt is the same, but an error runs through many of these figures. The nose and the upper mouth piece tends to fall off.

Since it was not publicly sold, this figure is quite rare. 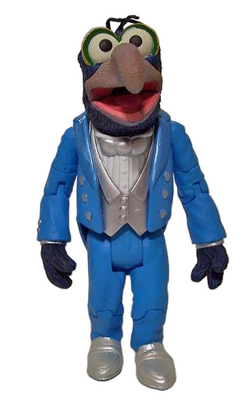 Retrieved from "https://muppet.fandom.com/wiki/Dream_Date_Gonzo_Action_Figure?oldid=1083563"
Community content is available under CC-BY-SA unless otherwise noted.