Steve Martin and Lubbock Lou and his Jughuggers play "Dueling Banjos" for the closing number in episode 208 of The Muppet Show.

Thirty-six years later, Martin reprised the song, this time opposite Kermit the Frog in a Funny or Die video.

Originally called "Feudin' Banjos", the song was re-arranged by Eric Weissberg and made famous in the 1972 movie, "Deliverance". 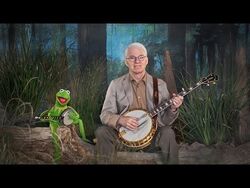