Dulce María (b. 1985) is a Mexican actress, singer, and songwriter, who gained international fame as a member of the Latin Grammy nominated pop group RBD and as Roberta Pardo on the hit Mexican telenovela Rebelde.

At the age of 8, she was part of the child cast on Plaza Sésamo, Mexico's equivalent to Sesame Street, from 1993 to 1995, and was featured in the opening credits. She returns to the show in a 2008 episode guest-starring with RBD, excluding Herrera, to sing "Una Pequeña Voz" with Abelardo, Lola, and Pancho. 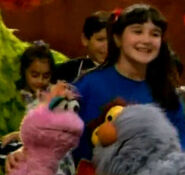 Dulce María as a child with Lola and Pancho.
Add a photo to this gallery
Wikipedia has an article related to:
Dulce María
Retrieved from "https://muppet.fandom.com/wiki/Dulce_Mar%C3%ADa?oldid=1153575"
Community content is available under CC-BY-SA unless otherwise noted.