Ed Helms (b. 1974) is an actor known for his roles on The Office and in The Hangover films. He also voiced The Once-ler in Dr. Seuss' The Lorax.

He appears in Sesame Street's 43rd season, demonstrating "grimace" as The Word of the Day with Elmo and a giant chicken.

Helms also guest stars in The Muppets episode "Pig Out." 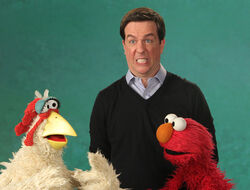 Add a photo to this gallery
Wikipedia has an article related to:
Ed Helms
Retrieved from "https://muppet.fandom.com/wiki/Ed_Helms?oldid=1070664"
Community content is available under CC-BY-SA unless otherwise noted.