El Baile del Pinguino ("The Dance of the Penguin") is a vintage mambo song, covered by such artists as Cab Calloway and Tito Puente. The song was adapted for a Sesame Street segment in the early 1990s, where it was sung in English and Spanish.

A bunch of penguins in Antarctica sing and dance together with their friend Fico from Puerto Rico. Everybody dances like a penguin, and by the end of the song cows, sheep, chickens, and a bear (who would later become Papa Bear) join in the song.

A new version of the song was performed in Episode 5025. 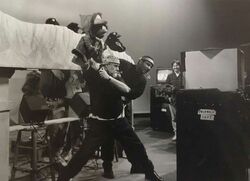 Behind the scenes
Add a photo to this gallery

Retrieved from "https://muppet.fandom.com/wiki/El_Baile_del_Pinguino?oldid=1272845"
Community content is available under CC-BY-SA unless otherwise noted.