Eliot Shag's Mom is the mother of Eliot Shag. She appears in a dream sequence in the Dog City episode "In Your Dreams." As a towering apparition, Mom asks why he never calls and admonishes her son to settle down and raise a litter.

In the second season episode "Springer Fever," when trying to find a new female model for Rosie O'Gravy, Eliot tries to channel his mother, dressing up as her. At the end of the third season episode "Howl the Conquering Hero," after Eliot realizes how much Terri Springer does as a mother to Artie Springer, he calls his own mother. Mom asks if he needs any money and reminds him to be careful during cold and flu season.

In the final episode "Dog Days of Summer," a portrait of the entire Shag family (mom, dad, and Eliot as a puppy) sits opposite Eliot's animation desk. 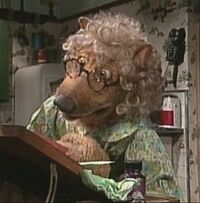 Eliot dressed as his mother 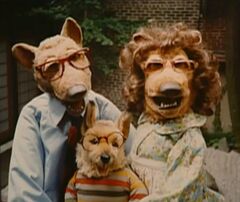 Shag family portrai
Add a photo to this gallery
Retrieved from "https://muppet.fandom.com/wiki/Eliot_Shag%27s_Mom?oldid=1083758"
Community content is available under CC-BY-SA unless otherwise noted.