Elmo's Alphabet Challenge is a 50-minute Sesame Street direct-to-video feature released on DVD in 2012. The DVD includes animated versions of the Sesame Street ABCs book series as a bonus feature.

Elmo and Telly Monster are playing basketball when Abby Cadabby shows them her new Fairy Fly Pad. They decide to play an alphabet game, which sends them into the Fairy Fly Pad. They meet A. B. C-more who tells them that in order to get out they have to find items beginning with each letter of the alphabet before A.B.C-more, who claims to be the greatest alphabet expert ever.

Throughout the challenge, A.B.C-more competes with either Abby or Elmo in parodies of a variety of video games, including Super Mario Bros., Angry Birds, Pac-Man, Guitar Hero, Just Dance, and Mario Kart. During the challenge, it becomes clear that A.B.C-more is not the alphabet expert he claims to be, constantly thinking that items don't begin with the letter they're focused on, and mistakenly thinking items that don't do begin with those letters, while the others always succeed in finding the right items.

When they get to the letter Z, Telly finds a zucchini on the ground. After initially struggling to pick it off the vine, Telly finally picks it and they win the game. A.B.C-more is impressed that they are better alphabet experts than he is, but Abby points out that they got a lot of practice on Sesame Street. A.B.C-more sends them back home, and even decides to visit their world. At first he wants to return home after a short while, but then they point out all the letters he can find on Sesame Street. 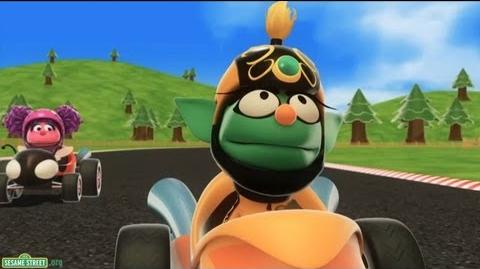