An elf falls out of Santa Claus' sleigh, losing the ten boxes out of his magical Christmas Counter-Downer. The boxes need to be replaced, or Christmas won't come.

Elmo promises to help the elf count down to Christmas, and they wish on a star for a miracle. One by one, Elmo's friends walk by -- Abby Cadabby, Bert, Super Grover, Big Bird, Ernie and Rubber Duckie, Baby Bear and his family -- and they each contribute a box to the elf's collection.

Finally, the elf slips and falls in the snow, having tripped over the final box. Elmo, Abby and the elf count down from 10 to 1, and Santa Claus is seen in the sky, bringing Christmas cheer to the world. 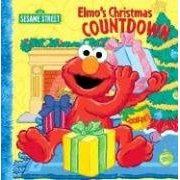 Nook editionBarnes & Noble
2012
Add a photo to this gallery 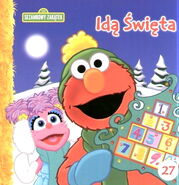 Idą święta
Poland, 2010
Add a photo to this gallery

Retrieved from "https://muppet.fandom.com/wiki/Elmo%27s_Christmas_Countdown_(2008_book)?oldid=1124598"
Community content is available under CC-BY-SA unless otherwise noted.