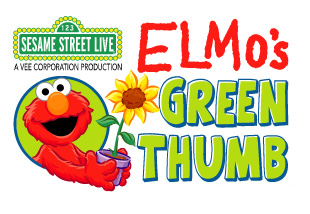 Elmo's Green Thumb is a Sesame Street Live show touring during the 2008-2009 season.

Elmo has raised his sunflower, Sunny, from a seed, but his floral friend has outgrown the flower pot. Elmo and friends find Big Bird’s garden the ideal place for Sunny to flourish and grow but they are too excited to wait. Rather than let Sunny follow nature’s course, Abby Cadabby, Sesame Street’s fairy-in-training, casts a spell to make Sunny grow. The spell does just the opposite and, instead of growing, Elmo and all of his friends shrink! While Abby searches for just the right words to reverse the spell, Elmo, Zoe, Telly and friends explore Big Bird’s garden from a smaller perspective and learn some big lessons about patience, overcoming their fears and appreciating the role that each creature plays in our ecosystem – from dancing ladybugs and beautiful butterflies to grouchy beetles that scavenge the garden floor. Will being small help Sunny grow tall? It’s a fresh, original Sesame Street Live from a whole new point of view!

As a marketing effort, Elmo threw out the ceremonial first pitch at a May 3, 2009 game versus the Los Angeles Dodgers, in advance of the show visiting the Nokia Theatre at L.A. Live on May 31.

Retrieved from "https://muppet.fandom.com/wiki/Elmo%27s_Green_Thumb?oldid=1187563"
Community content is available under CC-BY-SA unless otherwise noted.