Elmo's Super Heroes! is the 2010 Sesame Street Live touring show. When Super Grover loses his superpowers, Elmo helps him recover with the help of his Healthy Heroes. Together, they learn about exercise, nutrition, sleep and hygiene, and help Super Grover get back in the air. The show is a revised version of Super Grover! Ready for Action, the 2005 tour; originally, it was titled Elmo's Healthy Heroes!.

When Super Grover loses his "superness," Elmo, Zoe, Abby Cadabby and Telly Monster fill in with their own superhero alter egos. Aided by the Big Cheese and Kay, the four monsters become Captain Fuzzy, WonderZoe, Glitter Girl and Triangle Boy.

The show is written by Joey Mazzarino.[1] 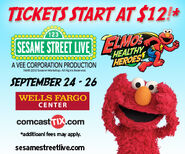 Retrieved from "https://muppet.fandom.com/wiki/Elmo%27s_Super_Heroes!?oldid=1187600"
Community content is available under CC-BY-SA unless otherwise noted.