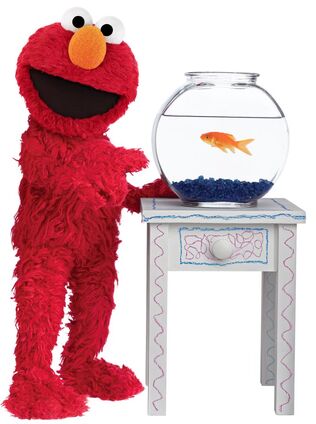 Elmo's World is a segment on Sesame Street starring Elmo. It ran consistently from seasons 30 through 42 (with the exception of two episodes in season 38). Each segment, or episode, runs approximately 20 minutes long following the same, basic format. Regular features include inserts featuring the Noodle Family, Elmo asking questions of a baby and email messages which feature other Sesame Street regulars. The segment takes place in a crayon-drawn depiction of Elmo's apartment. Its theme song is a rewritten variation of "Elmo's Song."

Each segment focuses on a specific topic - ranging from Balls or Jackets to Fast and Slow or Hands. The segments follow a series of skits and interviews centered on that topic. The skits and interviews are essentially the same every day, only changing the subject matter.

Production on new installments of Elmo's World was discontinued by 2009, and the segment was replaced by Elmo the Musical starting with season 43 (2012). Modified versions of past Elmo's World segments were reintroduced to the show in season 46.

Season 47 introduced a new version of the segment (alternatively referred to as "Elmo's Wonderful World"). Now running at five minutes, each segment features Elmo in a newly designed "world," still accompanied by Mr. Noodle and Dorothy, but joined by Smartie, an animated smartphone.

One characteristic feature of Elmo's World is that every episode has the same segments, in the same order. Research has shown that the formula appeals to young children's attraction to ritual and routine, and that children's participation with the program increases with repetition.[1]

The revamped segments follow a shorter, but structured format:

Elmo's World has spawned more than 64 episodes and two hour-long direct-to-video specials. Wild Wild West! was released in 2001 and Happy Holidays! in 2002. Elmo's World was also the featured setting for the 35th anniversary special The Street We Live On, in which Elmo takes on Sesame Street as the topic of the day for an hour-long episode. The Sesame Place amusement park has featured various Elmo's World Live! stage shows based on the segment.

In the season 37 episode "Cookie World," the plot features a spoof of the segment with Cookie Monster in place of Elmo.

The 2018 special When You Wish Upon a Pickle features a sequence based on the segment. Chris, after magically switching bodies with Elmo, dreams himself in Elmo's World, meeting Smartie and Ms. Noodle.

As shown in the Elmo's World: Happy Holidays! home video special, Elmo's World takes place inside one of Elmo's crayon drawings, which explains the scribbly look and bright colors of the digitally-generated set. While Muppet representations of the day's topic have always appeared inside Elmo's World, it was not until the season 35 special The Street We Live On that major Muppet characters also visited Elmo's World in person. Most segments usually feature cameos by at least two other recognizable characters (one of whom usually appears in sequences where Elmo asks a yes or no-type question).

Elmo said in a video that he got help from all his Sesame Street friends, in crayoning his apartment. Chris claims that his pants got messed up in the process.[2]

The basic look of Elmo's World has been replicated by the Indian co-production's segment The Word of the Day, also hosted by Elmo.

The idea for an Elmo-centered segment came just before the 30th season of Sesame Street. Research was showing that the average viewing age of the program was getting younger and was more popular with viewers under the age of three than ever before. Dr. Rosemarie Truglio, vice president of Education and Research for Sesame Street, attested that tests showed younger viewers were losing interest around the show's 45-minute mark. Producers came up with the idea for the original format to end around 45 minutes, and that a shorter, and very different styled, segment that was specially designed to engage the younger viewers, would air during the final 20 minutes of the show.[1] Judy Freudberg, Tony Geiss, Emily Kingsley, Cathy Turow, Annie Evans and Molly Boylan created and developed the concept along with Arlene Sherman.

“Each [episode] is about a specific subject, on dancing, or food - things that are of interest to kids. The hope is to increase the child's curiosity about finding out more about those things..."Elmo's World" is a self-contained 15-minute segment with its own opening, song and set. It looks at the world through the eyes of a 3-year-old and can be described as a crayon drawing that comes to life with sophisticated special effects.”

The first episode of Elmo's World, which was about balls, debuted on November 16, 1998 (in Episode 3786). Elmo's World has undergone a few changes since its conception. In the beginning, the same Elmo's World segment was repeated on all five shows for the week, but after the first five weeks of its debut season, the practice was dropped (and the summer reruns of many of these episodes would replace the Elmo's World segments with different segments).

In the segment's first year, episode scenes would occasionally segue to a shot of Elmo's apartment before fading to the opening sequence. Sometimes, Elmo would begin the segment by saying that he has to go feed Dorothy. From Season 31 onwards, the fade transitions were replaced with a simple page turning animation. During the first two seasons, Elmo would introduce "Elmocam" home videos. Later installments replace this portion with Elmo's computer delivering video e-mails from other Sesame Street characters on the topic of the day. Also, the film portions featuring kids were originally narrated by Elmo, but later on were switched to being narrated by the kids themselves.

Elmo's room is a simple raised set comprised for three walls (painted scenery flats) with crayon drawing designs. The episodes are produced outside of the regular seasons' production schedules.

Early on, many of the animated characters who interacted with Elmo — including his Drawer, Shade, Door, and TV — were performed in real-time alongside the puppet through the use of motion-capture puppeteering. Motion-capture performers included Rick Lyon, John Tartaglia, Matt Vogel, and Jim Martin (who also voiced Elmo's Computer).[4][5] However, the use of motion-capture was dropped as production got more complicated. In later episodes, simple stand-ins and markers were used and the animated characters were added in post-production using traditional key-frame computer animation techniques.

For more complicated shots that show the use of Elmo's entire body, a puppet known as "Active Elmo" is used and additional puppeteers assist and are matted out along with the main performer in the final shots. Assisting Kevin Clash as Elmo for the original Elmo's World segments were Matt Vogel, John Tartaglia and others.

The last new episode of Elmo's World in its original format, "Frogs," aired in 2009. Repeats continued to be a regular feature in new Sesame Street episodes up until season 42. In a 2011 interview with the fan website ToughPigs, Kevin Clash revealed that the segment would be replaced by a new, 11-minute Elmo segment, created by Joey Mazzarino, Belinda Ward, Luis Santeiro, Molly Boylan, Christine Ferraro, and Annie Evans. The resulting segment, "Elmo the Musical," debuted in season 43.

Beginning in the fall of 2015 (in both half-hour edits of older episodes on PBS and season 46), past segments were trimmed to a 7-minute run time, cropped into widescreen with altered footage and music scores.

It was subsequently announced that season 47 in 2017 would feature a revamped version of the segment. Each segment runs five minutes in a newly-designed world, where Elmo interacts with Smartie, an animated smartphone, and his old friend Mr. Noodle (along with three of his siblings). The segment's new intro song, a slight remix on "Elmo's Song," was written by Christine Ferraro, Bill Sherman and Jenna Lankford.

For season 51, as part of the "Furry Monsters" campaign, a new format was introduced called Elmo's World Monster Edition

, where another monster character (Cookie Monster or Grover) learns about the topic alongside Elmo. They also join Elmo for the closing song, now called the "Monster Dance".

The reboot was replaced in Season 52 by an animated segment, "Elmo & Tango's Mysterious Mysteries".

The segments have also been broadcast as a standalone program (on Britain's Channel Five, the Australian Broadcasting Corporation, Canada's Family Channel and translated into Danish and Spanish, among others).

Bangladeshi co-production Sisimpur has a segment inspired by Elmo's World, Ikri's World. Instead of being inhabited by animate objects that are normally inanimate, Ikri Mikri's imagination features traditional Bangladeshi puppets. This segment also features a clown similar to Mr. Noodle that tries to answer Ikri's question through pantomime.