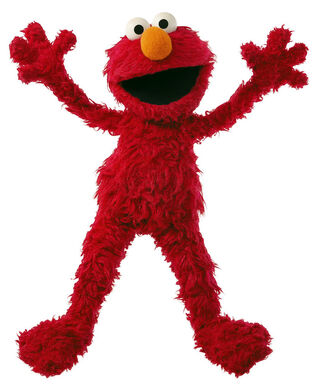 The character is self-described as 3-and-a-half years old, and refers to himself almost entirely in the third person.[2] As with many children of his age, he is seen somewhat infrequently with a favorite toy of his: an orange monster-like doll named David. Elmo lives in an apartment with his mommy, his daddy, and, in some storybooks, a sister named Daisy.In 6 contries They have Their own elmo puppet.

The puppet that would eventually become Elmo has been around since the early 1970s. During this time, he was referred to as Baby Monster, and had a number of performers ranging from Caroll Spinney[3] to Jerry Nelson[4] for background scenes. Elmo first appeared on Sesame Street specifically as "Elmo" in Season 12[5] where he was performed by Brian Muehl. After Muehl's departure in 1984, the character was re-cast to Richard Hunt. After performing Elmo for a couple of episodes,[6] Hunt literally tossed him over to Kevin Clash, since Clash was the only other person in the Muppeteer lounge at the time.[7] Around that time, writer David Korr took a liking to the character, and backed up with the positive research, started using it regularly.[7]

A popular doll called the Tickle Me Elmo was manufactured in his likeness, and became the must-have toy during the 1996 Christmas season. A tenth anniversary edition, T.M.X. Elmo, was released in 2006. Other Elmo toys include Hokey Pokey Elmo ("Hokey Cokey Elmo" in the U.K.), Limbo Elmo, Chicken Dance Elmo, Let's Pretend Elmo, and Elmo Live.

Elmo was the star of the full-length, theatrically released motion picture The Adventures of Elmo in Grouchland. He also made minor appearances in Follow That Bird, the wedding scene in The Muppets Take Manhattan, and A Muppet Family Christmas.

Elmo can be seen in the home videos Elmo's Sing-Along Guessing Game, The Best of Elmo, Elmocize, and Elmo Visits the Doctor, and has also appeared in many other videos, including Play-Along Games and Songs, We All Sing Together and A Celebration of Me, Grover. Elmo has also starred in specials such as Elmopalooza and The Street We Live On. For a whole list of appearances of Elmo in videos, click here.

There are either eight or nine Elmo puppets currently available. Kevin Clash told Channel Newsasia that "this one [on my lap] is rodded. There's a full radio-controlled Elmo, there's one for the blue screen, etc. They do different things."[8] In later years, there has been a live-hand variant of Elmo, used in episodes like episode 4206 and specials like Elmo's World: Happy Holidays!

Additionally, dozens of Elmo variants have been created by the Muppet Workshop (now, Jim Henson's Puppet Workshop) almost exclusively for use in Tickle Me Land as figments of Dorothy's imagination. These creations build on the basic premise of the Elmo puppet, to create a unique design which displays a variation of Elmo as anything from a rock to an elephant, to even a male doctor and female nurse.

At the Muppets, Music & Magic event at The Cinema Arts Centre in August 2007, Elmo joked that the reason he speaks in the third person is that he gets paid for each time he says "Elmo."

Elmo tweeted about his third person speaking in March 2010; "Someone just told Elmo yesterday was Talk in Third Person Day. Elmo doesn't know what that is but it sounds fun. Can Elmo play?"