Elvan Akyildiz (b. 1977) plays Elvan on Sesamstraat, the Dutch co-production of Sesame Street.

Teenager Elvan is a 'big sister' to the Muppets. Ieniemienie especially looks up to her. She also stars in mime sketches with Hakim Traïda.

The young Turkish actress has been a part of Sesamstraat since 1997, following Esther Prins and Lot Lohr as the teenager character. Originally, she was a babysitter for the Muppets.

Akyildiz made her TV debut in Fort Alpha, a drama series about a high school. 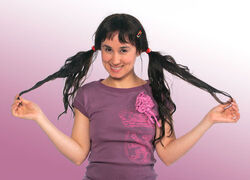 Add a photo to this gallery
Retrieved from "https://muppet.fandom.com/wiki/Elvan_Akyildiz?oldid=1070854"
Community content is available under CC-BY-SA unless otherwise noted.