Costello appeared on Sesame Street for the song "(A Monster Went and) Ate My Red Two", a parody of his song "(The Angels Wanna Wear My) Red Shoes", with Elmo and Cookie Monster. (YouTube) He also appeared in the show's 50th anniversary special, where he sang "Bein' Green" with Kermit the Frog.

Costello has written for Vanity Fair, and appeared as himself in the feature film Austin Powers: The Spy Who Shagged Me and the television series 30 Rock and 3rd Rock from the Sun. 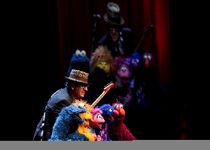 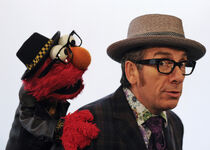 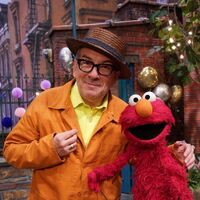 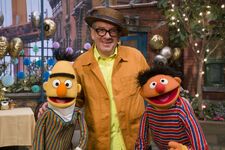 Costello with Bert and Ernie
Add a photo to this gallery

Wikipedia has an article related to:
Elvis Costello
Retrieved from "https://muppet.fandom.com/wiki/Elvis_Costello?oldid=1261163"
Community content is available under CC-BY-SA unless otherwise noted.