Elvis Presley (1935-1977) was an iconic rock and roll singer, often nicknamed "The King." Elvis' trademarks included his ensemble of jump-suits and capes, his thrusting body movements, and his voice, with a unique, varying center of gravity. He popularized such songs as "Heartbreak Hotel," "Return to Sender," and "Hound Dog," and parlayed his musical popularity into starring roles in several frothy musical films. With Elvis' death, his image and personality entered pop culture in a myriad of ways, from continued rumors of his survival or possible abduction by aliens, depictions of his likeness on velvet paintings, and his residence, Graceland, becoming a tourist destination. 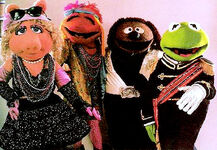 Rowlf as Elvis for The Muppet on Tour: 2nd Edition 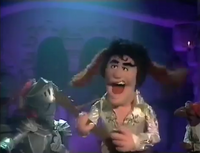 Rowlf as Elvis on The Jim Henson Hour 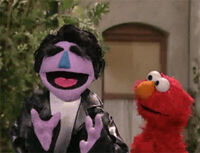 The King of Reading and Writing 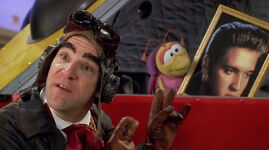 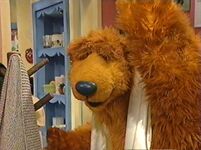 Bear as Elvis in "I Gotta Be Me!"
Add a photo to this gallery

Wikipedia has an article related to:
Elvis Presley
Retrieved from "https://muppet.fandom.com/wiki/Elvis_Presley?oldid=1343930"
Community content is available under CC-BY-SA unless otherwise noted.