The three Elvises are Muppet characters parodying rock-and-roll icon Elvis Presley. They have been performed by Bill Barretta, Brian Henson, Jerry Nelson, Dave Goelz, and others.

The Elvises were first seen in the 1994 direct-to-video special Muppet Classic Theater, playing the parts of the elves in "The Elves and the Shoemaker."

They were brought to Muppets Tonight in 1996, where they were prominently featured in the recurring "Great Moments in Elvis History" sketches.

They later appeared during the "Moulin Scrooge" number in the 2002 TV-movie It's a Very Merry Muppet Christmas Movie. 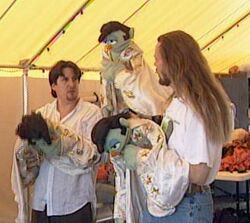 Bill Barretta and Steve Whitmire on the set of It's a Very Merry Muppet Christmas Movie
Add a photo to this gallery
Retrieved from "https://muppet.fandom.com/wiki/Elvises?oldid=1084211"
Community content is available under CC-BY-SA unless otherwise noted.