A list of appearances that Muppets have made on Emmy Awards and Daytime Emmy Awards broadcasts.

Big Bird joins Dick Cavett as a presenter at the prime-time awards, marking the first appearance of a Sesame Street character at the ceremonies.

This was also the first appearance of a redesigned Big Bird puppet, with a fuller head of feathers. Offstage, Big Bird was photographed with Peter Ustinov's head inside his beak.[1] 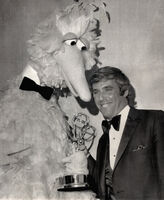 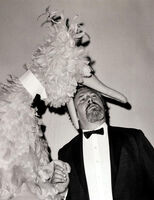 Kermit the Frog and Cookie Monster present the award for "Best Children's Series." Cookie Monster ends up eating the envelope before its announced, and Kermit has to use a flashlight to see who the winner is. The winner ends up being a tie between Sesame Street, The Electric Company, and Zoom.[2]

Miss Piggy thinks that she and Kermit have been asked to host the show, but he explains that they're just there to read the rules. Piggy is offended: "I did NOT spend six hours with Monsieur Jacques of Encino to read lousy rules!" She pouts while Kermit reads the rules, then refuses to get offstage until she gets a close-up, and eventually karate chops the frog for his remarks before leaving the stage.

The Sesame Street cast appears performing a tribute to television using letters of the alphabet (mixed with portions of "Sing"). (YouTube)

Jim Henson appears as himself, presenting the award for "Best performer in a variety or music series" with Paul Williams. Before coming on-stage, Tom Selleck talks about Jim Henson's beginnings and the "I've Grown Accustomed to Her Face" clip is shown. Although Jim Henson appears without any of his characters, he does announce the winner, Cloris Leachman, in Kermit's voice.

Miss Piggy appears to accept the "Grand Jury Lifetime Achievement Award for Non-Humans," which Kermit corrects swiftly, telling her that they appear to give the "Award for Outstanding Individual Performance in a Variety or Music Program." John Lovelady and Allan Trautman are among the nominees for Sid and Marty Krofft's D.C. Follies, while Linda Ronstadt wins the award.

Preceding their onstage appearance, a clip montage of famous puppets is shown. Among the clips are two borrowed from The Muppet Show: One featuring Edgar Bergen and Charlie McCarthy from their appearance and Fozzie Bear's act from episode 424 (his name on-screen being misspelled as "Fozzy Bear").

Kermit and Miss Piggy host the pre-show for the Emmys.

Oscar the Grouch and All My Children actor David Canary, both in trash cans, present the award for Outstanding Performer in a Children's Series. Kevin Clash wins the award.

Caroll Spinney is awarded a Lifetime Achievement Award from the Daytime Emmys.

Elmo and Tyra Banks presented the winners of the "Children's Emmy Awards."

Big Bird, Elmo, Cookie Monster, Gordon, Bob, Maria, Luis, Abby Cadabby, Dorothy, Zoe, Chris, Telly, and Oscar the Grouch performed a medley of songs on the awards broadcast to celebrate the 40th anniversary. Sandra Oh presented the Lifetime Achievement Award. The broadcast opened with Oscar working at the will call window of the theater, denying admission to Gordon and Elmo to the ceremony, but allowing actor Erik Estrada to enter without a ticket. Just as everyone is about to leave the stage, Cookie Monster steals the award and says to the Academy that not only is the award a great honor... "IT DELICIOUS!" He proceeds to start to eat the award, commenting that "it taste better than Latin Grammy!"

Oscar the Grouch and Anderson Cooper introduced the show. Oscar, claiming he's only appearing because Elmo was booked, sings "What's So Great About Daytime?"

Kevin Clash was amongst the presenters at the Creative Arts Emmy Awards, held June 17. The "Outstanding Performer" and "Outstanding Children's Animated Program" categories were awarded at the main Daytime Emmy award ceremonies.

Elmo, Abby Cadabby and Alan, along with Donny Osmond, opened the evening with a medley of "Sing" and the "Sesame Street Theme."

Later in the show, the three appeared alongside hosts Mario Lopez and Sheryl Underwood to discuss the show's 50th anniversary and introduced a clip montage of the series.

The ceremonies were held virtually, due to the COVID-19 pandemic. Cookie Monster presented the Daytime Emmy for "Outstanding Culinary Series". Big Bird and Cookie Monster appeared as insets during the acceptance speech for "Outstanding Special Class Special." Various clips from past ceremonies were aired, throughout the broadcast. One clip was of the 2004 appearance.

Caroll Spinney was featured in the ceremony's "In Memoriam" segment.