The Epcot International Flower & Garden Festival is an annual event held at Walt Disney World's Epcot Center since 1993. The festival consists of specially-themed floral displays throughout the park, including topiary sculptures of Disney characters. The event runs for approximately two weeks each year and features new and returning topiaries each year, including Mickey Mouse, Minnie Mouse, Goofy, Snow White and the Seven Dwarfs, Pixar characters including Buzz Lightyear and Woody, Bambi, The Lion King, Peter Pan, Phineas and Ferb, Fantasia, Winnie the Pooh, and Lady and the Tramp.

The 2014 festival features Kermit the Frog and Miss Piggy amongst the floral displays in promotion for Muppets Most Wanted. The displays could be found between the Italy and Germany pavilions in Epcot's World Showcase from March 5th to May 18th.

The 2019 festival featured the Miss Piggy topiary sitting alone and a new Kermit topiary riding a bamboo bicycle. The displays were placed in the France pavilion. 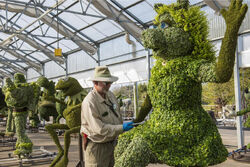 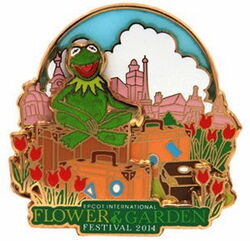 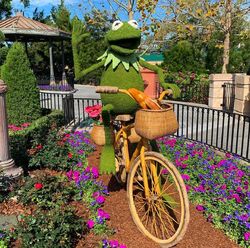 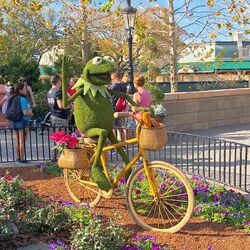 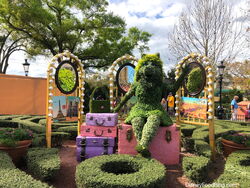 Miss Piggy in the 2019 display 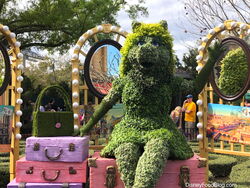 Add a photo to this gallery
Retrieved from "https://muppet.fandom.com/wiki/Epcot_International_Flower_and_Garden_Festival?oldid=1158316"
Community content is available under CC-BY-SA unless otherwise noted.