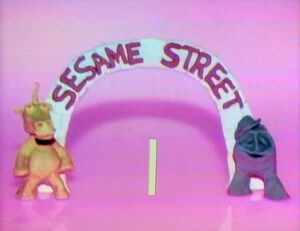 In the first episode of Sesame Street, Gordon takes a girl named Sally (Troy Beyer) on a tour of Sesame Street, introducing her (and the viewers) to the various characters on the show. On the street, Sally meets the human cast -- Gordon, Susan, Bob, and Mr. Hooper -- as well as two Muppet characters, Big Bird and Oscar the Grouch.

Ernie and Bert appear for the first time and Kermit the Frog gives a lecture on the letter W, interrupted by an early version of Cookie Monster.

Also featured in this episode are the first installments of the "Number Song Series" and "Jazz" cartoons, the first appearance of a group of Anything Muppets, and the first performance of "One of These Things". Carol Burnett is the first celebrity guest to appear on the show.

In this episode, many sketches are introduced by the characters, even within the inserts. This reflects the fact that the show was initially conceived as a children's version of Rowan & Martin's Laugh-In. For example, Gordon asks Kermit to give his W lecture, and when the sketch begins, Kermit says that Gordon asked him to talk about the letter W.

Retrieved from "https://muppet.fandom.com/wiki/Episode_0001?oldid=1300968"
Community content is available under CC-BY-SA unless otherwise noted.