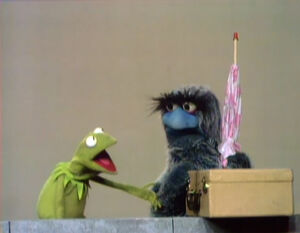 “I told the electrician I didn't like the setup, that it looked downright dangerous to have it burning right above my head. "Don't worry about it," he assured me as he put a match in the liquid. Blue flames danced around the rubber, and black smoke began to curl upward.

"Countdown to action—five, four...," came the call. The oil began to boil. The electrician lowered a stovepipe over the flaming liquid, and as a roar erupted, I stood up and pushed the whole trash-can unit forward so I could escape this frightening inferno. "Hey! Get back in there!" the floor manager shouted. "We're rolling!"

"Not me!" I replied. At that instant the stovepipe exploded and the flames burst fifteen feet up the side of the brownstone. Panic took over as people frantically searched for fire extinguishers. There didn't seem to be any on the set floor. Some were brought in from outside, and the fire was put out.

The inside of the trash can was totally burned out, exactly where my head would have been. Later we did the scene again with cool white smoke and without the electrician.[4]”

Retrieved from "https://muppet.fandom.com/wiki/Episode_0118?oldid=1244128"
Community content is available under CC-BY-SA unless otherwise noted.