"Bear Left Then Bear Write" is the third episode of the 2015 television series The Muppets.

Fozzie takes things a little too far when Kermit offers him advice and Nick Offerman steps in to help the gang. Meanwhile, Christina Applegate guests on Up Late, and brings Miss Piggy a sweet surprise that doesn’t go over well and Pepe, Rizzo and Liam Hemsworth try to help Gonzo out with his online dating situation. 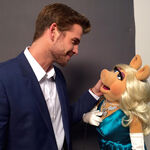 An extended version of the scene with Chip servicing Gonzo's computer as described by Claire Suddath for Bloomberg Businessweek was not used in the final version of the episode:

In today’s scene, Gonzo’s computer crashes. When the IT guy, Chip—a new Muppet—goes to fix it, he discovers that Gonzo has been catfishing women by posing online as the actor Liam Hemsworth.

“Even I know that won’t work, and my entire life consists of two dates with a cashier from Walgreens,” Chip says. Prady frowns. “That’s an unnecessary jab at women who work at Walgreens,” he says. Prady, 55, has a large head, close-cropped hair, and a wide, thin mouth that makes him look a bit like one of the Muppets he’s filming—specifically Chip, who was modeled after Prady.

They reshoot the scene. Dave Goelz, who’s been voicing Gonzo since 1976 and is manning both puppets, tries another joke for Chip: “My entire love life consists of going to the prom with my mother.”

Goelz tries it. Then aunt. Then grandmother. Sometimes Chip stares at Gonzo with his mouth open and eyes closed. Then Goelz gives him an overbite. He makes Chip snort when he laughs. He keeps trying things, and the scene takes an hour to film. It ends up being largely improvised, which is the way Goelz usually works. In the end, Chip’s dating experience is reduced to “an inappropriately long handshake with a Jehovah’s Witness.” Prady finally laughs.[1]