Teenage Matt Banting wants to work with a famous but eccentric creature/special effects man named Chancey Bellow. He gets more than he bargained for when one of the creatures, the giant dragon-like Ultragorgon, takes Matt under his wing. Matt is forced to confront his inner monsters while working out his issues with his father.

In the closing, Jim Henson mentions that although the creatures look real, they are not actually alive. He tells how many performers were needed for the Ultragorgon (including Brian Henson operating the head). He also brings out Kermit the Frog who comments that he liked the special. 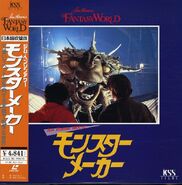 Netflix "watch instantly"
Add a photo to this gallery
Retrieved from "https://muppet.fandom.com/wiki/Episode_106:_Monster_Maker?oldid=1160208"
Community content is available under CC-BY-SA unless otherwise noted.