Scooter talks Fozzie into doing "the telephone pole bit," and Fozzie practices dutifully until he finds out what the bit is: Fozzie dresses up as a telephone pole, and Scooter asks what his name is. "Mike Oznowiczki," Fozzie says, and Scooter exclaims, "Oh, so you're the telephone Pole!" Fozzie is convinced that they will die on stage. They do.

Frogs.JPG
The Frog Chorus, singing "I'm in Love with a Big Blue Frog" 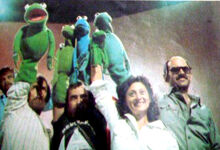 Retrieved from "https://muppet.fandom.com/wiki/Episode_108:_Paul_Williams?oldid=573899"
Community content is available under CC-BY-SA unless otherwise noted.