Embarrassed about being the "token person" on the show, Harvey is dressed up as a giant chicken.

Jim Henson as Kermit the Frog, Dr. Teeth, Waldorf, and the Newsman
Frank Oz as Fozzie Bear, Animal, Sam the Eagle, Patient, Pig, Baskerville, George the Janitor, and Mildred
Jerry Nelson as Robin, Thog, Crazy Harry, Floyd, the Announcer, one of the Houses, Whatnot, Chickens, and T.R. Rooster
Richard Hunt as Statler, Miss Piggy, Wayne, and Miss Piggy's dancing partner
Dave Goelz as Zoot and Muppy
Eren Ozker as Rowlf's dancing partner, Janice and Wanda
John Lovelady as one of the Houses 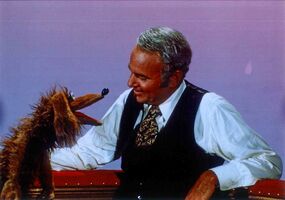 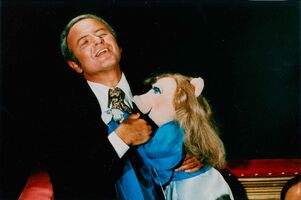 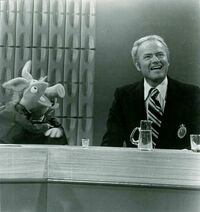 Add a photo to this gallery
Retrieved from "https://muppet.fandom.com/wiki/Episode_110:_Harvey_Korman?oldid=1342823"
Community content is available under CC-BY-SA unless otherwise noted.